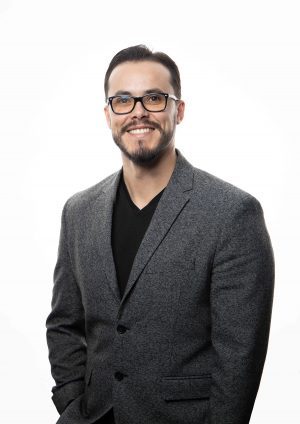 Robert has a master’s degree from the Institute of Advanced Architecture of Catalonia, a Diploma in Digital Fabrication from the Fab Foundation, and is a Certified Innovation Manager from the University of Leipzig.

Robert has extensive academic experience as a professor at the Architecture and Product Design schools of the Veritas University in Costa Rica (2007-2016). In 2015, he was invited to develop and teach a digital manufacturing course as part of “FACILIDAD” (Program for the Promotion of the Economy and Employment in Central America) promoted by the German Corporation for International Cooperation (GIZ) with the primary objective of improving employment for the youth in El Salvador. Also, he has participated as a guest tutor in undergraduate and graduate workshops for institutions such as the Institute of Advanced Architecture of Catalonia, the Bartlett School of Architecture in London, the University Center for the Arts of San Luis Potosí Mexico, and the College of Engineering of Qatar University.

Thanks to his experience in topics related to innovation, digital fabrication, education, architecture and design, Robert has participated as a guest, speaker and jury in different events worldwide such as “Pechakucha 20×20” at the Maker Fair in Rome, “TEDx Pura Vida” in Costa Rica, “City Lab” in Miami, the “Medellin Design Week” in Colombia, “Phi’s Research And Innovation Summit” in Jordan, “Teaching Innovation Forum” at the Ibero-American Design Biennial in Madrid, the “Rowad” Entrepreneurship Conference in Doha, the Edtechx Europe in London and the Global Education Technology Summit in Beijing.

Among some of his recognitions are the Hunter Douglas Awards “Archiprix International” in Shanghai (2007), the “Business Leader of the Year Award” of the Total Quality Award – Founders of Success in Guayaquil (2011), and the “Silver Chevron STEM Education Award” in France. Also, he was selected by the Costa Rican newspaper “El Financiero” as one of the 40 most influential people under 40 in Costa Rica (2016).

Passionate about sports, art, and any design strategy and collaborative action that allows the development and management of processes and projects of social and innovation impact.

He currently works as Operations Manager of IbTECHar Digital Solutions, a Qatari company leader in educational technology, selected by the committee of the World Economic Forum as one of the 100 new companies in the MENA region that is shaping the 4th Industrial Revolution (4iR). In 2015, ibTECHar launched the “Sanea Program” which includes: the Sanea Competition, the Sanea Bus, and the Sanea Camp.

As part of its services, IbTECHar has developed and/or collaborated in the management and execution of innovation laboratories such as the QBIC Fab Lab located at the Qatar Business Incubation Center, the MADA Fab Lab (the first one worldwide designed for people with disabilities), the Maker Space Studio 5/6, and the Fab Lab at the Qatar Science and Technology Secondary School for Boys.